About the Hill & Son Grand Organ

One of Australia's most beautiful Pipe Organs, brought to life in the Barossa Valley, SA

From an idea to a reality.

The Hill & Son Grand Organ was built by the distinguished firm of Hill & Son, London, for the Adelaide Town Hall where it was opened to the public in 1877. This firm also exported organs for the town halls in Melbourne (1872) and Sydney (1890). The Adelaide organ was enlarged in 1885 and much was rebuilt and altered in 1970. Replaced with a new organ in 1989, it was removed from the Adelaide Town Hall and placed in storage, its fate uncertain.

The Organ Historical Trust of Australia (OHTA) expressed interest in the organ and was given possession by the Adelaide City Council on the condition that it be restored and located in South Australia. A home for the organ was negotiated with the then Tanunda Council, later to become the Barossa Council, in the Tanunda Soldiers Memorial Hall.

From the outset, lifelong professional master organ builder George Stephens was involved with the project. The very extensive restoration work took more than 15 years to complete, which included the reconstruction of the entire mechanical key and stop actions, the wind system, console and restoration of the wind chests, pipework and redecoration of the casework and pipes. Assistance was gained from numerous other professionals with much help also provided by volunteers.

This project represented the most extensive and accurate restoration of a late 19th century English concert organ yet attempted. The project has been assisted by many generous donations from charitable trusts, business organisations and individuals, as well as much valuable expertise and contributions in kind. 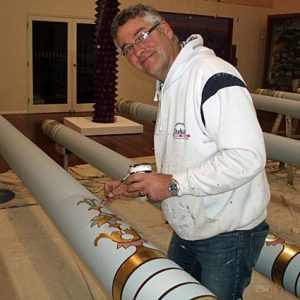 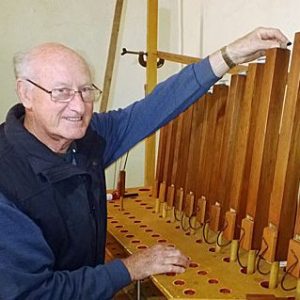 Join us on Wednesdays between 11:30am and 12pm for our ‘Tour, Talk and Taste’ presentation, where you can see, hear, and experience the Grand Organ for yourself! For more details, see the Events page.

For more information about the Hill & Son Grand Organ restoration and the Organ Historical Trust of Australia (OHTA), please visit the OHTA website at www.ohta.org.au.

(i) Swell to Great Sub Octave